Growing Your Business in India

You are here: Home / In the Press / Eurobrands in the WIKU economic paper

The three visiting companies included: Pircher Spa, a company which over the past 40 years specialized in concrete drainage systems for roads & airports, Betonform a leader in innovative slope stabilization techniques and Intercom Dr. Leitern, a company specialized in road maintenance and traffic monitoring.

The companies were accompanied by the Eurobrands India team in collaboration with the Export Organization (EOS) of South Tyrol, Italy

Infrastructure development in India offers huge potential as there is still so much to do! Especially in terms of road security, India needs to significantly scale up its infrastructure.

If you haven’t been in India, this video from BCC showing two Brits driving in India gives you a glimpse of what is happing on Indian roads:

Traffic management and traffic security are still very underdeveloped in India. Technologies and solutions as per European standards are in high demand. With a population of over 1.2 billion people, increasing international trade, industrialization and urbanization, traffic on India’s roads, rails, air and see will play a vital role for India’s future economic growth. The Indian Government has therefore allocated a 5 year budget of 90 billion USD for road construction (out of over one trillion (!) USD for overall infrastructure projects).

The delegates visited the Traffic Infra Tech trade fair on the first day, the second day b2b meetings and a visit to one of India’s biggest infrastructure company “L&T” took place.
Eurobrands India carried out a market research on India’s infrastructure sector, organized b2b meetings, held a seminar on doing business in India and concluded the three day visit with a Mumbai tour with focus on urban planning, infrastructure and architecture. 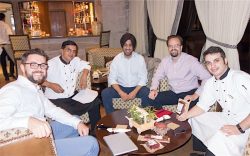